In order to enjoy as much as possible the sound of some video games it is often necessary to play them with a headset, or also to communicate with our team in multiplayer online.

Below we are going to list the best PS5 headsets by price range, so that you know which options are the ones that are moving in this new generation. 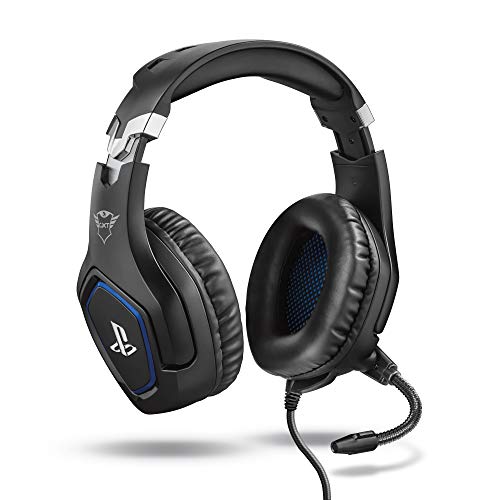 The Trust Gaming GXT 488 Forze are one of the best cheap headsets for PS5, especially because of all the positive ratings they are getting, which shows that users are happy.

In addition to coming with the official Playstation license, they also have a folding microphone, so that it does not bother us if we do not want to use it and also this microphone has an anti-pop filter so that our voice is not distorted in the most tense moments of a game, which is just when we can escape some scream that other.

As for the audio, it has 50mm devices that give a pretty good quality to everything we hear. The headphones have a nylon braided cable which includes a wheel to control the volume.

Finally, they are quite comfortable headphones, with adjustable headband and padded ear pads, plus they are headphones with a very attractive and beautiful design. 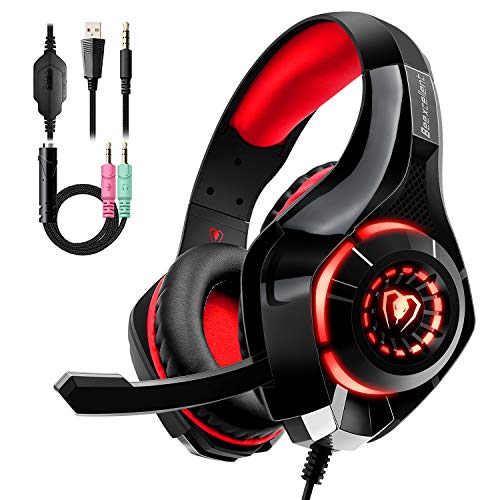 The audio quality provided by the 40mm drivers is more than sufficient, with crisp and correct sound.

The microphone is retractable and we can fold it when we do not want to use it, it also has a mute button. It also has noise reduction, so that we do not sneak unwanted sounds.

The connection is 3.5mm mini-jack.

In terms of ergonomics, the headphones are comfortable, with padded ear cups and an adjustable headband. They are also very light (233gr), which you will notice if your games last more than one or two hours.

It is one of the best cheap ps5 headset.

Taking advantage of the new generation, Razer has updated its range of Kraken headphones with this third version that comes with some polished aspects with respect to its predecessors.

The Kraken is a headset that stands out for its lightness, in this case 285 grams and this is an aspect that you should not overlook without more, since, from experience I tell you that it is very important that if you are going to be many hours, the helmets do not weigh you too much, there are many streamers who over the years have sinks in the skull because of this.

In addition, the headband padding is quite soft and the ear pads have a fabric that combines memory foam and fabric, very comfortable. They also feature Razer’s RGB Chroma technology.

As for the sound quality, these headphones come with devices called 40mm diaphragms patented by Razer, which modulate the audio wave and equalize it, leaving a clear and high quality sound.

In addition, if you use it with Windows 10, you can take advantage of the Audio 7.1 technology, to perceive the sound in 360 degrees.

Finally, the microphone has noise cancellation so that we can be heard well in our online games. 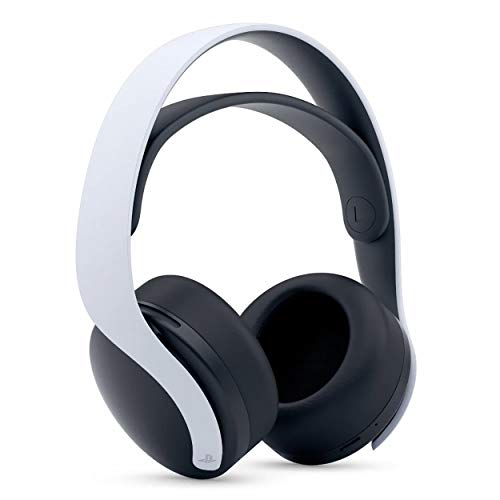 Sony’s new generation arrives with the promise of improving immersion in the world of video games and in terms of audio, its bet is called Pulse 3D Headset. The aesthetic lines of PS5 are noticeable both in the console and in the headset.

To immerse us even more in the game, Sony brings us the integration of 3D sound. These Pulse 3D wireless headphones are seamlessly integrated with Tempest 3D Audio Tech, the engine that PlayStation dedicates to sound management.

This gaming headset incorporates a system of two hidden microphones, fully integrated into the headset, whose most notable feature is noise cancellation: we can speak with total clarity with our gaming partners without outside sounds interfering with the conversation.

It is compatible with PS5, PS4, Windows and MacOS, thanks to the USB wireless adapter that comes with these Pulse 3D.

In terms of ergonomics, it includes a headband strap for improved fit, as well as improved ear cushions to enhance user comfort. It features a USB Type-C rechargeable battery system, which provides up to 12 hours of battery life. They also feature a mini-jack interface. 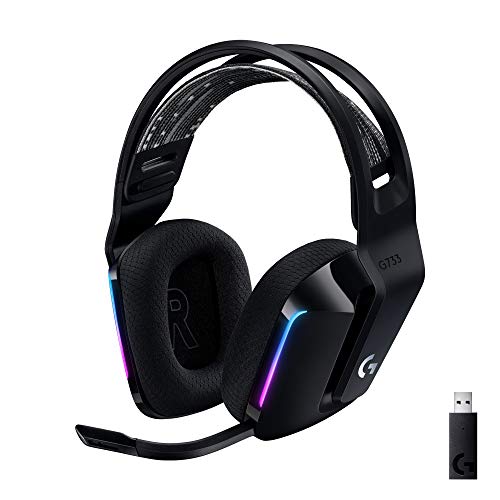 The Logitech G G733 is a mid-range to high-end wireless ps5 headset.

They have an operating radius of 20m and incorporate a wireless technology called lightspeed to reduce latency as much as possible.

As for the audio comes with DTS headphone technology and a Logitech transducers called PRO-G that clean the audio signal and reduce distortion leaving a sound quality of first line.

On the other hand, the microphone also has a great sound quality, as with the BLUE VO!CE, the audio signal is cleaned from any additional noise and is self-regulating.

It has a sleek and beautiful design at the same time, with an adjustable headband and most importantly, they weigh only 278gr, which compared to other wireless headphones is very little

The headset features a microphone mute button and volume control knob. It also includes a software, with which from a PC you can customize the side RGB lighting.

The autonomy is almost 30 hours on a single charge. 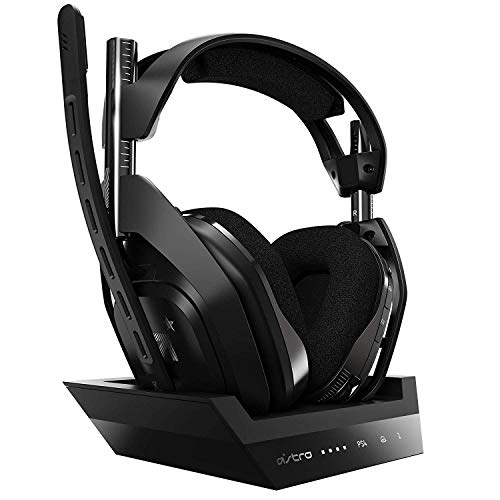 We reach the top of the range, and as usual in this league we find an Astro headset, this time it is the fourth generation of the A50 model.

This is a wireless headset with a futuristic design that comes with a charging base that in addition to its functionality will raise a couple of points the appearance of our gamer setup.

Going into the subject, these Astro A50 have Dolby Audio, which is the technology used to record the audio of movies, plus the sound is self-regulating to combine the audio of the game with voice chat.

For PS5 has a range of 9 meters and operates on the 2.4GHz band. As for the battery, it has a battery life of more than 15 hours of play time. The microphone is automatically muted if it is lifted.

It has pads and a padded headband with a fairly premium quality fabric.

Finally comment that has a PC software with which we can control all aspects of equalization, volume and gain of the microphone. 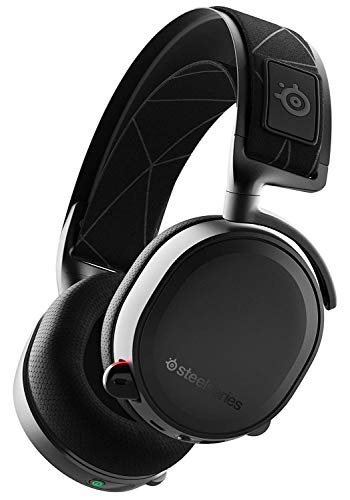 For the end we have left this little gem, the Steelseries Arctis 7.

It is obvious that they are a premium ps5 headset, by design, quality of components and ultimately by the presence.

We can start by saying that they are a wireless headset, working through the frequency of 2.4 GHz.

As for the sound, which is their forte, they use the same drivers as the S1 speakers. These drivers clean up any distortion of the audio waveform and reduce input lag to a minimum. It also incorporates DTS X v2 technology to reproduce spatial audio, i.e., we can perceive the source of a sound at 360º.

The Clearcast microphone is retractable and has a premium audio quality, leaving our voice clear and canceling any noise or distortion in the room.

They are very comfortable headphones that are self-adjusting with an elastic fabric. It is the same fabric used in ski goggles. The AirWeave ear pads are designed to prevent sweating or excessive heat in the ears.

On the side of the helmets there is a volume control knob for the input volume and another one for the output volume, with the option to mute the microphone.

The battery life is approximately 24 hours.