The latest console to hit the market has come from the command of a Japanese company, the Nintendo Switch. A versatile game console, which we can use in portable mode or plug it into the Dock and play on TV with an extra power added by the power supply.

In this article we will know the best controllers for the console, surely there is one that you do not know and did not expect. 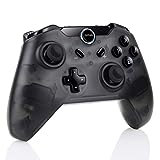 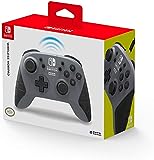 What is the Best Nintendo Switch Controller?

The Best Nintendo Switch Controller will depend on whether what we want are some Joy-Con or if we are looking for a traditional Gamepad.

Without further ado, let’s go with the selection. 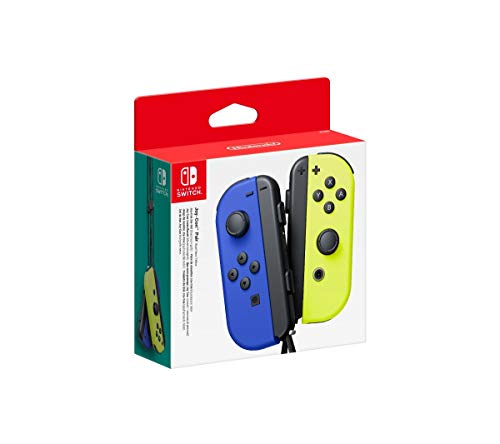 Connection: Wireless
Battery: 20 hours
Colors: Green/Pink, Yellow, Red/Neon Blue, Dark Gray
The Joy-Con are the controllers that define the philosophy of the game console: portability, versatility and fun together. These two controllers act as a gamepad divided in half, but also as two simplified single controllers.

The technology that incorporates these devices is more advanced than it may seem at first glance, the right joy-con incorporates an infrared camera that can detect shapes (in the physical world), movements and distance.

Each controller incorporates a gyroscope and accelerometer to capture the tilt of the joy-con at any given moment, features that made its pre-predecessor Nintendo Wii special, but this time without the need for cameras.

Each joy-con has 7 interaction buttons, 2 button triggers, a joystick and a shortcut button to the console menu or to capture video. When we use the joy-con individually, we attach the straps, a top piece that adds 2 top triggers for local multiplayer.

This Joy-Con pack is available in several colors: neon blue and neon red, neon yellow, neon gray and green and neon pink. The autonomy of each controller is approximately 20 hours and they are charged by snapping them into the console.

It is in these controllers where Nintendo has introduced to the market the Rumble HD technology, a high-definition vibration that exceeds any other gamepad on the market today. It is able to simulate that the controller is a box with cubes inside, as if it were a dice cup.

The controllers are attached to the console using rails and are removed by pressing the safety button on the back. We must be careful that if we play with the strap, you have to insert them in the right direction, for this we will look at the symbols of + and -.
See price

In conclusion we are talking about high quality controllers that give the Nintendo console great versatility and define a philosophy of group play and anywhere that makes it stand out from its competition, which is more oriented to the graphic power. 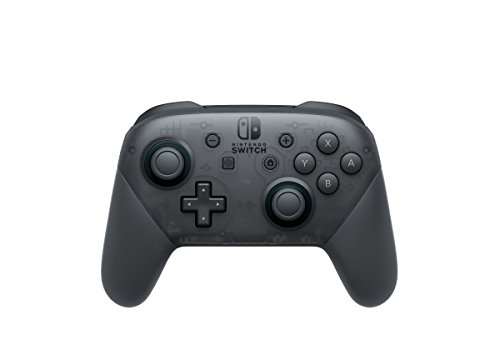 Connection: Wireless
Battery: 40 hoursbattery life
Colors:Wide variety
And now we come to the official Nintendo Pro Controller, the gamepad that provides the best experience for gamers who want to play both desktop and handheld single player games.

With a very sober look, we came across this controller with a high quality finish of its materials, with its two joysticks, 8 front interaction buttons, 4 top buttons, crosshead and 2 shortcut buttons.

The joystick position chosen is reminiscent of Microsoft’s Wireless controller, the grip area has a non-slip surface and large buttons, overall it’s a nice and smooth design

The size of the sticks is somewhat larger than those of the Joy-Con, which allows an improvement on the angle of movement that can come in handy, especially in shooter-style games.

The controller’s battery lasts around 40 hours, doubling the autonomy of its siblings, the Joy-con, but also surpassing the controllers of other platforms, even those of PC. Charging is via a USB-C cable, which connects to the Dock, a cable that is included with the controller.

The controller also includes HD vibration, accelerometer and gyroscope, thus providing almost all the functionality of the Joy-Con, except for the infrared camera. The connection is via Bluetooth 3.0, being compatible with PC.

This is an optional controller, so its acquisition is not necessary to enjoy the Switch experience, but if you are a Pro-Gamer and you know you will be throwing many hours to the console and you prefer to enjoy it in the best way, I sincerely encourage you to get one, as this is a quality device and if you know how to appreciate it you will not regret it. 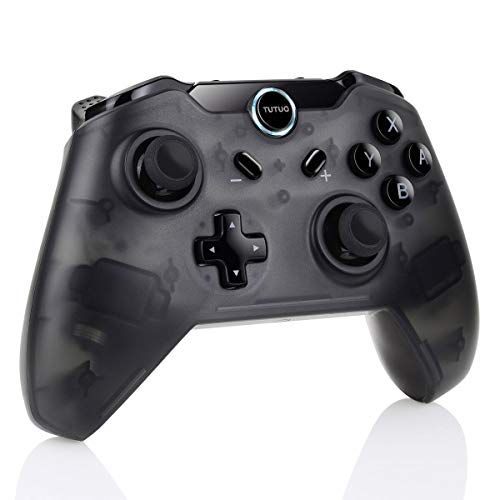 Connection: Wireless
Battery: 5 hours
Colors: Transparent black
The TUTUO is the first controller manufactured by third parties in this list. We are facing a controller with a very similar design, if not practically the same as the XBOX One, which is not a bad thing.

The button layout is the same as the Pro controller, with the only difference being that the + and – button have a slightly different shape, but nothing remarkable

The controller has a plastic finish, which makes us intuit that it would be a range below official Nintendo, although for that same reason we are talking about a cheaper controller.

Despite being a cheap controller, it also comes with the motion sensor, although the manufacturer does not specify whether it combines accelerometer and gyroscope or only makes use of one of these two features.

It has a 380mAh battery, which gives it an autonomy of approximately 5 hours, with a charging time of between 2 and 3 hours. Charging is via USB-C cable.

As for the vibration, it has it but it does not reach the official Nintendo Rumble HD technology, which to this day is also not very exploited in the games that the platform has released, which is not a great loss.
See price

This is an ideal cheap controller for Nintendo Switch, with the quality a rung below the officially licensed controllers but it delivers perfectly at a very competitive price and the reviews left by customers are clearly positive for the most part. 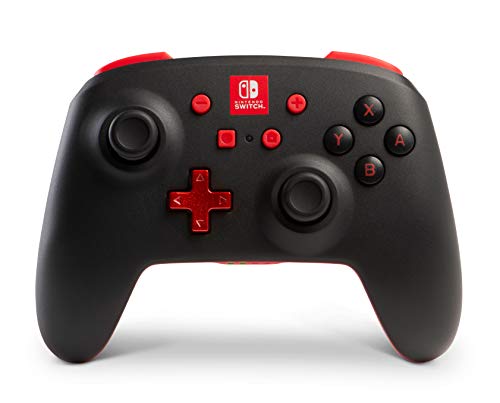 At first glance we could confuse it with the official controller, as it has the same layout of the buttons, which are slightly larger than those of the joy-con and the sensations are good.

The controller has a very important aspect that is hard to find in other Switch controllers; it’s the 2 rear buttons in the grip area fully mappable, making it a competitive controller, with the advantage of being able to jump and aim at the same time in multiplayer shooter.

This competitive version of the controller also includes motion and vibration control. The wired version does not include either of these two features.

The controller is wireless and is powered by two AA batteries, which can run for about 30 hours

These gamepads have the official Nintendo license, which makes them fully compatible with any game console, an aspect to consider when investing in any device.

The PowerA comes to blow us away its version of the Switch Pro controller that are at the height of the best, with a finish in quality a rung below, but a performance a rung above in the wireless version. 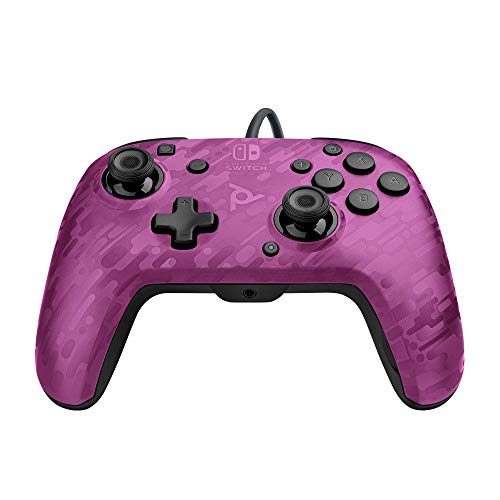 From the hand of PDP Gaming, comes this Pro Faceoff Deluxe Controller, the second Nintendo Switch competitive controller on the list.

At first glance we find the same appearance as the official Nintendo pro controller, with the great addition of the two rear levers, which are rather buttons integrated into the housing.

With these levers we can map any button on the controller to be able to press it without having to lift our thumbs from the joysticks. In addition, the controller comes with a joystick of a higher height than the built-in ones and we can replace it by simply lifting the front casing and changing it

As for audio, this is one of the few controllers that include a mini-jack input to connect headphones directly to the gamepad. It also includes sound input, so we can use any of the Nintendo Switch headphones.

The buttons are very comfortable to press and the ergonomics of the controller is very similar to the official one, so it is more than worked and feels like a piece of controller even if it is cheap.

Having such a tight price they have had to cut somewhere, so the controller has no gyroscope or vibration.

The only downside, if you can call it that, is that it’s wired. The fact is that if what we want is a competitive controller, the cable will probably reduce the input lag, so it is not bad news, plus it is 3 meters.

Rating:
8.5/10 If you are looking for a competitive controller for switch and you don’t mind that it works by cable and has no vibration, without a doubt the Pro Faceoff Deluxe from Pdp is a great option.
DESCUENTO 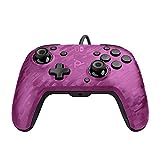 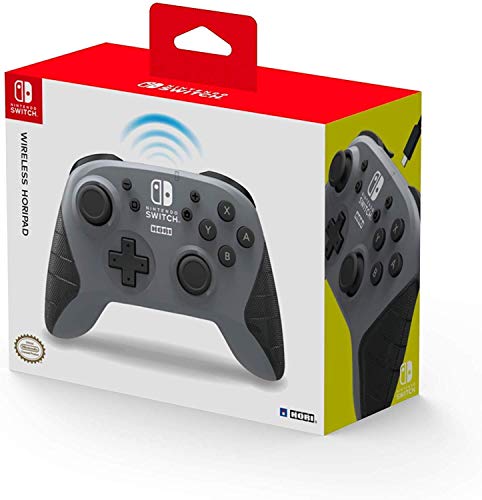 It is wireless and also includes motion and vibration sensor.

In terms of ergonomics it presents itself as a fairly comfortable controller, with rounded corners which gives it a nice and neat look. It has the same buttons as the pro controller, as well as the joysticks.

It’s made of hard plastic, but the materials feel sturdy enough to feel like it’s a quality device.
See price

These are high quality controllers at a much lower price than the company’s official gamepads, a highly recommended purchase if you know what you’re going for. 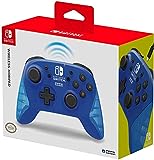 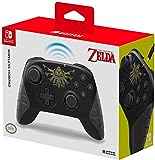 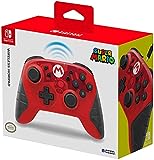 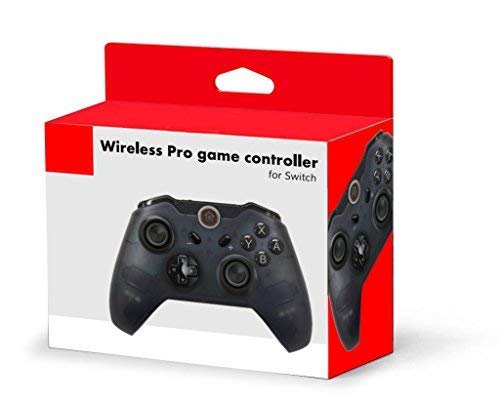 Connection: Wireless
Battery: 5 hours
Colors: Black, transparent blue, transparent yellow and blue/black/red
From the hand of JFUNE comes this Wireless Controller with the same functionality of the original but with a new design and at first glance with a somewhat smaller size than the usual controllers.

The controller has the same buttons and joysticks as the Nintendo Pro controller, but the vibration in this case is the normal one, not the HD one.

The housing material is hard plastic and the front buttons are of standard size, neither too big nor too small, and the top buttons are slightly larger than those normally found on official controllers, giving it a more attractive look and improving ergonomics.

This is a wireless controller that works via Bluetooth, with a 380 mAh battery, which gives it an approximate autonomy of 5 hours and to charge it we will need 2 to 3 hours, using a USB-C type cable that comes included with the controller.
See price

Almost all the opinions of gamers who have gotten this gamepad are very positive and highly recommend its purchase as an alternative to the original controller, so it seems that we are talking about a reliable brand. 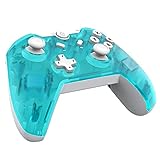 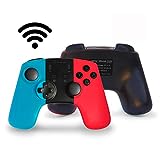